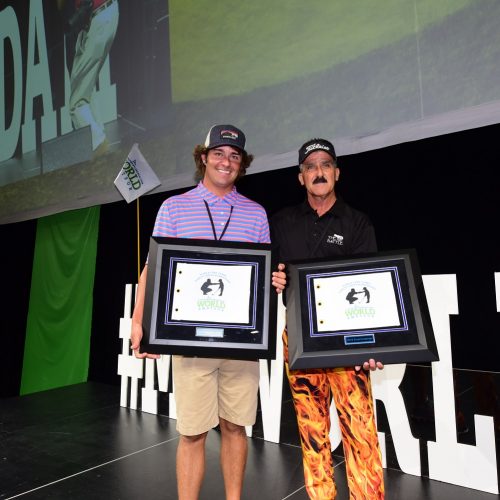 Golf means different things to different people, but for so many it has served as a familial bond, uniting parents and children in a game that transcends age, adolescence and nearly everything else. This “tournament within a tournament” is as much about honoring the bond between golf and family, as it is golf competition. The Mark & Cory Lemke Parent-Child Championship is open, free of charge, to any combination of parent and child participating in the World Amateur.

The sub-tournament is played in honor of Cory Lemke, who won his flight at the age of 15 in 2002. Cory and his father, Mark, a 12-year World Am tournament participant, played countless rounds of golf together, the game serving as a common ground between a son growing into manhood and his father. Cory Lemke tragically lost his life in a motorcycle accident in 2006, but his memory lives on through the Mark & Cory Lemke Parent-Child Championship.

How Do I Register?

What Does it Cost?

This competition is FREE.

Two-person teams (team can consist of any combination of parent and child) that are competing in a competitive division at the World Am.

All applicable Rules and Regulations for the World Amateur Handicap Championship apply for the Mark & Cory Lemke Parent-Child Championship.

For purposes of the Mark & Cory Lemke Parent-Child Championship, there will be one flight/division for all teams. The two-person teams may consist of male/male, female/female, or male/female.

The winning team will receive commemorative plaques. In addition, the top five teams will receive discounts to participate in the World Am the following year. Ties for prizes will be broken using the combined net team scores from the last day of competition, if necessary, subsequent daily combined net scores will be used to break ties beginning with Wednesday’s scores; if ties still exist, 9-hole combined totals will be used starting with the back nine scores of Thursday’s round.

If during this golf event at the World Amateur, either team member is disqualified because of a rules infraction or handicap discrepancy, their team will also be disqualified from the Parent-Child golf competition. All decisions of the Rules Committee are final.