The World Am’s Biggest Winner is in 21st Place – Really!

Fred Ruth is playing with house at money at this year’s World Am.

Recording an ace during a Sunday skins game at World Tour will provide that luxury.

The Marietta, Ohio resident, who has been playing in the tournament for more than 10 years, stepped to the third tee on the Championship 9 at World Tour battling the dreaded “S” word (for everyone’s sake, I won’t say or type the name but you know what I’m referring to).

“The range finder said 124 yards, so I took an 8 iron,” Ruth said of a hole that was inspired by the par 3 8th at Royal Troon. “I was doing everything I could to make sure (the ball) didn’t go right. It went straight.”

The ball hit the green, went the past the hole and drew back.

Given that he didn’t see the ball drop, Ruth was more shocked than exhilarated by his good fortune, but the reality certainly sunk in, and his one, obviously, held for a coveted skin. (In case you were wondering, yes, he bought his playing partners drinks but not the entire field!).

How stunned was Ruth? He continued to play with the lucky ball through the next hole, until it dawned on him he needed to take it out of play.

The ace was his second and his first since the mid-90s. A former high school athletic director, Ruth comes to the tournament by himself, and his good fortune didn’t end with the Sunday skin.

During his opening round Monday at Pine Lakes, he birdied the par 4, 299-yard ninth hole, but figured, given the hole’s length, his score would be equaled. It didn’t happen. Nobody else in the field birdied the hole, giving Ruth his second skin in as many days.

“I’m not going to be winning (my flight) but I won by having a hole in one and having fun with the people,” said Ruth, who was in 21st place after two rounds. 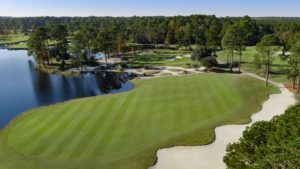 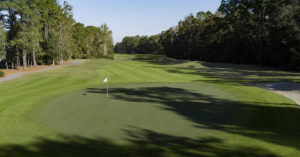 I think we can all say that we would have preferred having the actual March Madness we are accustomed to at this time of year, 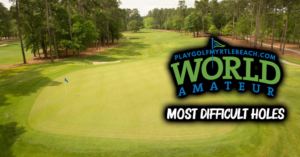 Most Difficult Holes at World Am

Hole 9 – Rivers Edge 570 yards – Par 5 This hole makes the difficult hole list even though it’s a par 5.  Usually nothing